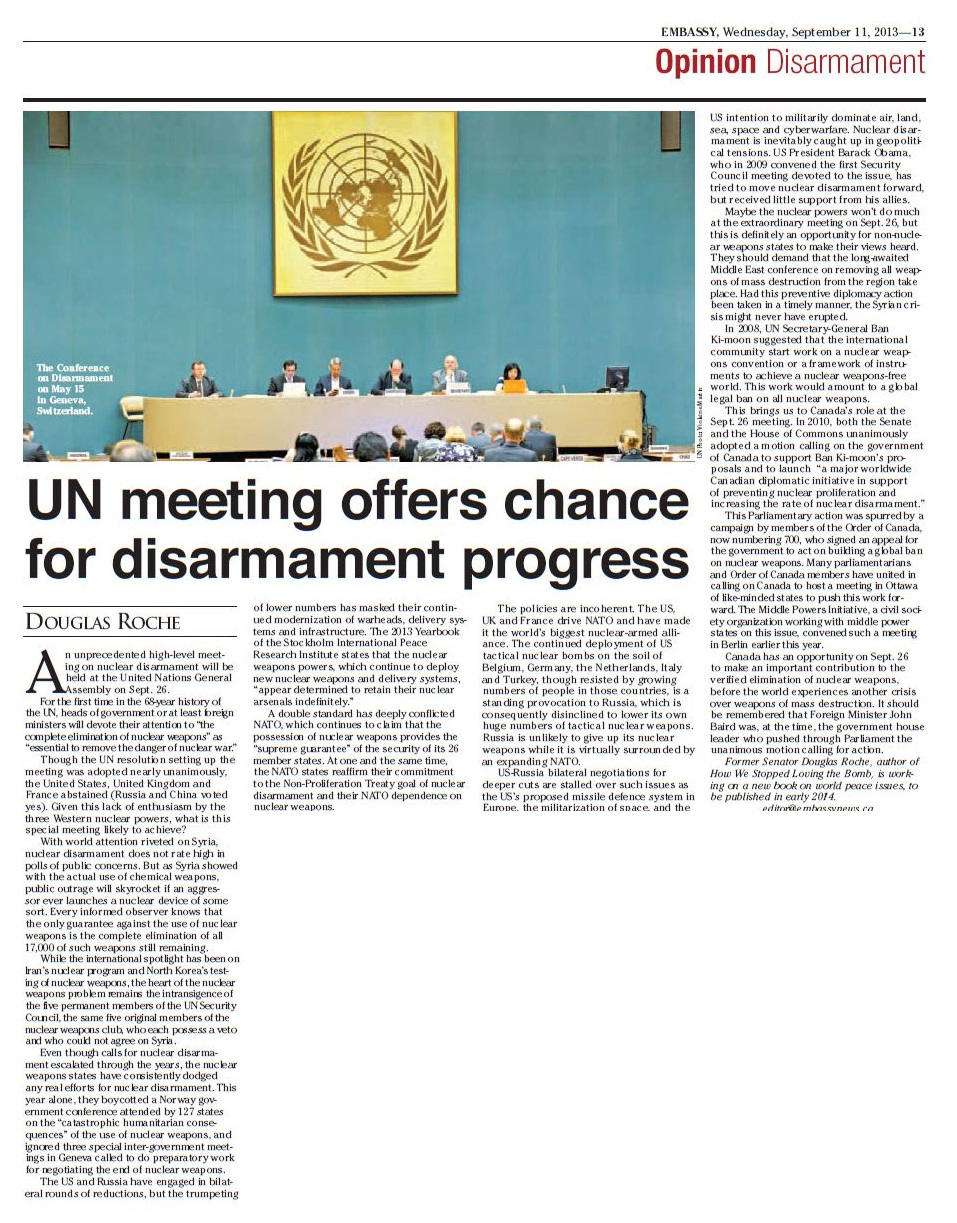 An unprecedented high-level meeting on nuclear disarmament will be held at the United Nations General Assembly on Sept. 26.

For the first time in the 68-year history of the UN, heads of government or at least foreign ministers will devote their attention to “the complete elimination of nuclear weapons” as “essential to remove the danger of nuclear war.”

Though the UN resolution setting up the meeting was adopted nearly unanimously, the United States, United Kingdom and France abstained (Russia and China voted yes). Given this lack of enthusiasm by the three Western nuclear powers, what is this special meeting likely to achieve?

With world attention riveted on Syria, nuclear disarmament does not rate high in polls of public concerns. But as Syria showed with the actual use of chemical weapons, public outrage will skyrocket if an aggressor ever launches a nuclear device of some sort. Every informed observer knows that the only guarantee against the use of nuclear weapons is the complete elimination of all 17,000 of such weapons still remaining.

The US and Russia have engaged in bilateral rounds of reductions, but the trumpeting of lower numbers has masked their continued modernization of warheads, delivery systems and infrastructure. The 2013 Yearbook of the Stockholm International Peace Research Institute states that the nuclear weapons powers, which continue to deploy new nuclear weapons and delivery systems, “appear determined to retain their nuclear arsenals indefinitely.”

A double standard has deeply conflicted NATO, which continues to claim that the possession of nuclear weapons provides the “supreme guarantee” of the security of its 26 member states. At one and the same time, the NATO states reaffirm their commitment to the Non-Proliferation Treaty goal of nuclear disarmament and their NATO dependence on nuclear weapons.

The policies are incoherent. The US, UK and France drive NATO and have made it the world’s biggest nuclear-armed alliance. The continued deployment of US tactical nuclear bombs on the soil of Belgium, Germany, the Netherlands, Italy and Turkey, though resisted by growing numbers of people in those countries, is a standing provocation to Russia, which is consequently disinclined to lower its own huge numbers of tactical nuclear weapons. Russia is unlikely to give up its nuclear weapons while it is virtually surrounded by an expanding NATO.

US-Russia bilateral negotiations for deeper cuts are stalled over such issues as the US’s proposed missile defence system in Europe, the militarization of space, and the US intention to militarily dominate air, land, sea, space and cyberwarfare. Nuclear disarmament is inevitably caught up in geopolitical tensions. US President Barack Obama, who in 2009 convened the first Security Council meeting devoted to the issue, has tried to move nuclear disarmament forward, but received little support from his allies.

Maybe the nuclear powers won’t do much at the extraordinary meeting on Sept. 26, but this is definitely an opportunity for non-nuclear weapons states to make their views heard. They should demand that the long-awaited Middle East conference on removing all weapons of mass destruction from the region take place. Had this preventive diplomacy action been taken in a timely manner, the Syrian crisis might never have erupted.

In 2008, UN Secretary-General Ban Ki-moon suggested that the international community start work on a nuclear weapons convention or a framework of instruments to achieve a nuclear weapons-free world. This work would amount to a global legal ban on all nuclear weapons.

This brings us to Canada’s role at the Sept. 26 meeting. In 2010, both the Senate and the House of Commons unanimously adopted a motion calling on the government of Canada to support Ban Ki-moon’s proposals and to launch “a major worldwide Canadian diplomatic initiative in support of preventing nuclear proliferation and increasing the rate of nuclear disarmament.”

This Parliamentary action was spurred by a campaign by members of the Order of Canada, now numbering 700, who signed an appeal for the government to act on building a global ban on nuclear weapons. Many parliamentarians and Order of Canada members have united in calling on Canada to host a meeting in Ottawa of like-minded states to push this work forward. The Middle Powers Initiative, a civil society organization working with middle power states on this issue, convened such a meeting in Berlin earlier this year.

Canada has an opportunity on Sept. 26 to make an important contribution to the verified elimination of nuclear weapons, before the world experiences another crisis over weapons of mass destruction. It should be remembered that Foreign Minister John Baird was, at the time, the government house leader who pushed through Parliament the unanimous motion calling for action.

Former Senator Douglas Roche, author of How We Stopped Loving the Bomb, is working on a new book on world peace issues, to be published in early 2014. editor@embassynews.ca