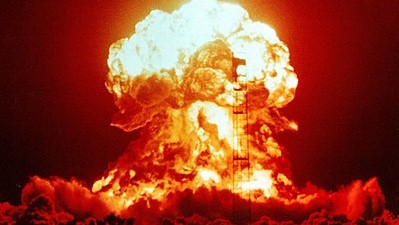 Pdf of Call to Action

On the historic occasions of,

The 75th Anniversary of the atomic bombing of Hiroshima and Nagasaki, killing more than 200,000 people,

The 75th Anniversary of the founding of the United Nations whose stated purpose is to “save succeeding generations from the scourge of war…” and whose first Resolution sought the elimination of atomic weapons,

And the 50th Anniversary of the entry into force of the Treaty on the Non-proliferation of Nuclear Weapons that binds almost all of the world’s nations,

The Canadian Network to Abolish Nuclear Weapons issues to the Government of Canada the following Call to Action on Nuclear Disarmament:

Nuclear weapons present an existential threat to humanity and to our planet;

Use of even 1% of the global nuclear arsenal of approximately 13,400 nuclear weapons could result in a loss of millions of lives immediately and billions more from radiation and starvation as a result of ensuing nuclear winter;

Nuclear-armed states have embarked on a new nuclear arms race under the banner of ‘modernization’, including the development of new types of, and new roles for nuclear weapons;

North Korea has not renounced nuclear tests and the USA is considering a resumption of nuclear testing after a 28-year hiatus;

Recent technological developments including missiles that can travel up to 27 times the speed of sound, vulnerability to cyber-attack and the deployment of tactical nuclear weapons, have increased the likelihood of their deliberate or accidental use;

Several non-nuclear armed states including Iran, Saudi Arabia and South Korea have indicated that they too could pursue nuclear weapons capability;

Non-state actors including Daesch and Al Qaeda have pledged to acquire nuclear weapons;

There has been dramatic deterioration of the nuclear arms treaty regime in recent years including:

Article VI of the Treaty on the Non-proliferation of Nuclear Weapons to “pursue negotiations in good faith on effective measures relating to cessation of the nuclear arms race at an early date and to nuclear disarmament, and on a treaty on general and complete disarmament under strict and effective intentional control”;

The ever-present risk of human miscalculation or accident that have brought the world terrifyingly close to the brink of nuclear disaster many times over the past 75 years; and

The dangerously high level of tension between and among nuclear-armed states;

The hands of the Doomsday Clock, being set, on January 23, 2020, at 100 seconds to Midnight, the closest to ‘Doomsday’ since it was created by atomic scientists in 1947;

We, citizens of Canada, call upon the Government of Canada, on an urgent basis, to:

Act upon the motion adopted unanimously in the House of Commons and the Senate in 2010 that “encourages the Government of Canada to engage in negotiations for a nuclear weapons convention as proposed by the United Nations Secretary General, and to deploy a major world-wide Canadian diplomatic initiative in support of preventing nuclear proliferation and increasing the rate of nuclear disarmament”.

In so doing, Canada should, inter alia:

We further urge the Government of Canada to:

Another nuclear event could occur at any time. We must do everything within our collective power to rid the world of this existential threat and to preserve our planet for succeeding generations.

On the 75th anniversaries of the nuclear bombing of Hiroshima and Nagasaki on August 6th and 9th respectively, and of the establishment of the United Nations, the CNANW has formally called upon the Government of Canada to act upon a motion adopted unanimously in the House of Commons and the Senate in 2010 that encourages a major world wide Canadian diplomatic initiative in support of preventing nuclear proliferation and increasing the rate of nuclear disarmament.

Modern thermo-nuclear weapons are literally thousands of times more powerful than the atomic bombs dropped on Japan. Experts around the world note alarming developments in recent years that have significantly increased the risk of deliberate or accidental use of nuclear weapons, even a small number of which could cause the deaths of millions of people immediately and billions in the years following.

Among other things, the CNANW urges the Government of Canada to:

The Canadian Network to Abolish Nuclear Weapons invites all concerned Canadians to inform the Prime Minister and their Member of Parliament that they support this Call to Action on Nuclear Disarmament and wish their Government to do everything possible to address this existential threat to humanity and preserve our planet for succeeding generations.

Produced by the CNANW Steering Committee: