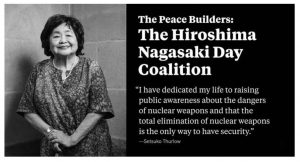 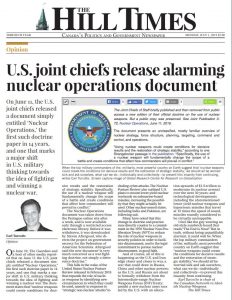 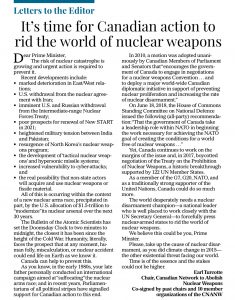 “If we can move from the passivity of the old narrative of nuclear weapons,  as something that is inevitable, to an action narrative that demonstrates they are expensive, dangerous and irrelevant to the needs of all citizens, especially the young, then perhaps we may see the old arguments challenged and the decaying walls of false security come tumbling down.”

From Canadians for a Nuclear Weapons Convention

Jan 24, 2019
Dear Prime Minister,
We write to urge, in the strongest terms, you and your government to publicly and prominently call on all the parties to the Intermediate-Range Nuclear Forces (INF) Treaty to ensure that it is preserved.

With the Presidency of Mr. Trump, we are urgently seeking your engagement in an emergency response plan to confront the possible use of nuclear weapons by President Trump. He has been quoted as saying “If we have [nuclear weapons], why can’t we use them?” President Trump has joined the small group of “leaders” who claim the right to kill millions of people to protect their country’s interests. It is clear he is a man of little patience, no diplomatic expertise, no military or conflict resolutions skills. His control of “the button” places the global community in grave danger.

We call on you to use your considerable skill in inspiring communications and clear thinking to urgently lessen and eliminate the nuclear threat. We believe you have the capacity to ensure a more secure future for your family and our families, and indeed the global family.

More specifically, we would propose that you personally take these steps:

1. During your first meeting with President Trump, propose a Reykjavik-style bilateral summit between him and President Putin to discuss how they could further reduce nuclear arsenals and work together to pursue global nuclear disarmament.

3. Seek cooperation with like-minded leaders of NATO member states to promote reduced Allied reliance on a nuclear deterrent and to make an active contribution to creating the conditions necessary for a “world without nuclear weapons”.

4. Direct Canadian diplomats to engage in upcoming negotiations on a legal instrument prohibiting nuclear weapons and in all other processes that will advance nuclear disarmament

5. Strongly support public advocacy on the increased threat of a nuclear weapons exchange and the need for urgent work toward nuclear disarmament.

We recognize the load on you has been heavy but want to assure you that should a nuclear exchange occur, a legacy of environmental agreements and pipelines will be irrelevant. There can be no greater 150th Birthday gift to Canada than one of increased security for Canadians and the global community.

Canada must be clear-eyed about nuclear disarmament
ERNIE REGEHR AND DOUGLAS ROCHE
Globe and Mail
JANUARY 20, 2019

Ernie Regehr is the chairman of Canadians for a Nuclear Weapons Convention, a project of Canadian Pugwash, and the former executive director of Project Ploughshares. Douglas Roche was a senator from 1998 to 2004, and was the Canadian ambassador for disarmament.

The world is about to lose one of the most important nuclear disarmament agreements ever made – and distressingly, Canada is silent.

The 1987 Intermediate Nuclear Forces (INF) treaty, signed by then-U.S. president Ronald Reagan and former Soviet Union president Mikhail Gorbachev, marked the beginning of the end of the Cold War. It bans the possession, production and flight-testing of ground-launched missiles within the 500-to-5,500 kilometre range and bans launchers for such missiles. Also, it resulted in the elimination of 2,692 Soviet and U.S. missiles based in Europe, and it was key to building an innovative system of verification, data exchanges, and mutual consultations.

Now, U.S. President Donald Trump has said the United States intends to suspend its participation in early February, leading to its termination six months later. The United States says the Russians are cheating. Russia says the United States is stretching the treaty’s boundaries. The debate over who’s right is what verification procedures and diplomatic talks are all about.

The stakes are very high. Mr. Gorbachev, now in retirement, and George Shultz, who was Mr. Reagan’s secretary of state, have issued a dire warning that “abandoning the INF” would undermine strategic stability and be a step towards an immensely destructive war. Retired senator Sam Nunn and Barack Obama’s former energy secretary Ernest J. Moniz, two giants in the realm of U.S. arms control who now run the Nuclear Threat Initiative, have also warned of a “cascade of negative consequences” if the INF treaty is abandoned. Those risks include the unfettered deployment by Russia of intermediate missiles sparking a new arms race, serious division within NATO, and the undermining of efforts to rally the world to prevent the further spread of nuclear weapons and missiles.

The end of the INF also portends the collapse of the U.S.-Russia New START pact, which is due to expire in 2021 unless it is renewed. The United States has signalled it isn’t interested in renewing the one nuclear disarmament pillar left to hold a new outbreak of long-range missiles in check, and the nuclear-armed states are already modernizing their nuclear stocks.

Countries such as Canada must intervene and demand a diplomatic review of INF compliance procedures because we have a big stake in whether the world will lapse into a new nuclear arms race – and that could be where things are headed.

The importance and success of this treaty cannot be in doubt. The Pugwash Conferences on Science and World Affairs, the international organization that won the Nobel Peace Prize in 1995, warns against “a world ungoverned by treaties constraining actions of states with nuclear weapons,” and concludes that “decades of effort to build an architecture of restraint are unravelling because key lessons from the early years of the Cold War seem to have been forgotten.”

In 2018, both the Group of Seven and NATO summits – two groups that include Canada as a member – declared that the preservation of the INF treaty is a key to Euro-Atlantic and international security. That’s a good start. But we are disappointed that the government of Canada has itself remained inexplicably silent in the face of the Trump administration’s threat to abandon the treaty.

This is not simply a European or U.S.-Russia matter. Canada definitely has a stake in averting the catastrophic humanitarian consequences of the use of any nuclear weapon. As the great Canadian diplomat George Ignatieff once said, “No incineration without representation.”

This is not a time for quiet diplomacy. Canada has a voice and stature in the world. We must be heard by those who control our fate of whether we will live or die in a nuclear war. What the world should be witnessing is not the collapse of nuclear arms control treaties, but new agreements to provide for further reductions in deployed and stockpiled nuclear weapons.

Silence is an abrogation of responsibility. We urge Prime Minister Justin Trudeau and his government to provide bold, public, and insistent leadership, because continued silence won’t do anything to stop the loudest and most tragic explosion.

Canadian Council of Churches urges that the Government of Canada support the United Nations Treaty on the Prohibition of Nuclear Weapons: