[version française ci-dessous en pièce jointe]
A version of this commentary also appeared in The Hill Times on July 27, 2022 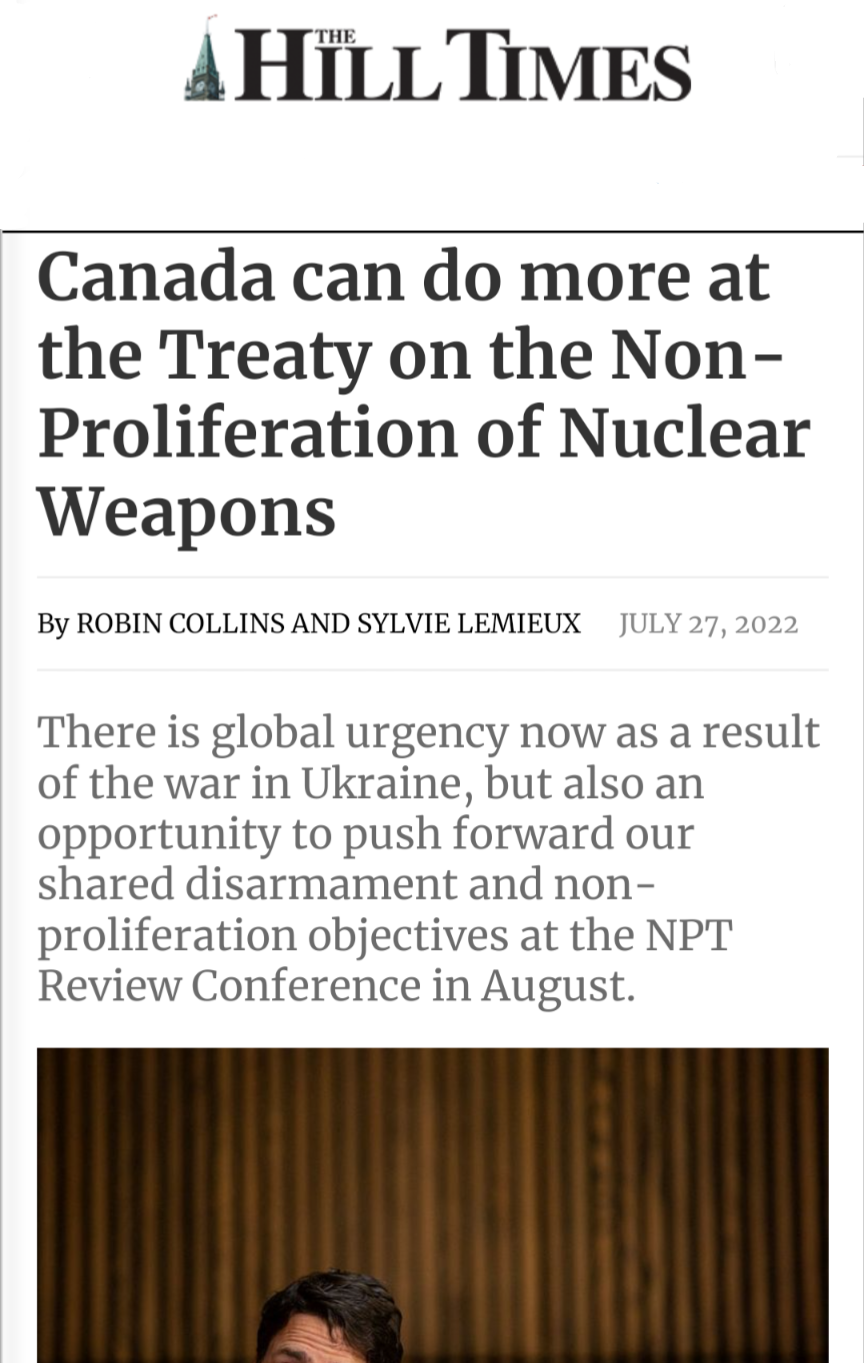 The Treaty on the Non-Proliferation of Nuclear Weapons (NPT) entered into force in 1970 and is designed to prevent the spread of nuclear weapons, to promote cooperation in the peaceful uses of nuclear energy, and to further the goal of nuclear disarmament. It is supported by 191 states, but not four unofficial nuclear-armed countries: India, Israel, North Korea and Pakistan, nor South Sudan.

The Canadian Network to Abolish Nuclear Weapons (CNANW) recognizes the positive steps Canada has made towards the aims of the NPT, but there is much more to do. There is global urgency now as a result of war in Ukraine, but also an opportunity to push forward our shared disarmament and non-proliferation objectives at the NPT Review Conference this August.

Canada did attend The Vienna Conference on the Humanitarian Impact of Nuclear Weapons in June, but no officials attended the Treaty on the Prohibition of Nuclear Weapons (TPNW) first meeting of states parties, even as observers, despite strong efforts from the Canadian disarmament community and several parliamentarians advocating for Canada to show up.

Canada did attend the five ministerial meetings of the “Stockholm Initiative”, a diplomatic forum that proposes risk reduction measures and a “stepping stones approach” to nuclear disarmament, but the government chose not to be represented at the ministerial level, a gesture that would have increased Canada’s visibility.

At the Madrid NATO Summit in June, Canada failed to speak out against the NATO consensus that the military and political organization will “remain a nuclear alliance while nuclear weapons remain”, a mantra that logically makes nuclear weapons more permanent, not easier to eliminate in keeping with NATO’s goal of a world without nuclear weapons. Indeed, nuclear weapons will continue to be a global threat while NATO persists in being a nuclear-armed alliance.

After two years of delay due to the COVID pandemic, the NPT review conference is being held in New York in August. Divisions have worsened between nuclear weapon possessing states and those allies supporting NATO nuclear deterrence policy on one hand, and states supporting the TPNW on the other. Given global obstacles and the heightened risks of expanded war, including nuclear war, as a result of the conflict in Ukraine, Canada needs to demonstrate leadership at the Review Conference in these areas:

Encourage complementarity through respectful references to the TPNW, and by seeking to engage rather than alienate TPNW supporters in furtherance of NPT goals. Similarly, support civil society initiatives, such as Abolition 2000’s effort (Frameworks for a Nuclear-Weapon-Free World) to broaden the options available towards abolition, whether it be a nuclear weapons convention; a framework of instruments; or the TPNW, bolstered by protocols or related instruments.

Call for renewed diplomatic efforts to deal urgently with the outstanding proliferation issues of North Korea and Iran.

Promote greater transparency through the common reporting formats that Canada has championed, and which can provide for fact-based judgments on the progress of NPT parties in meeting nonproliferation and disarmament obligations.

Support operationally significant nuclear risk reduction measures such as de-alerting deployed ICBMs and adopting a No First Use policy.  Advocate as well against increases in nuclear missile inventories, or any expansion of nuclear weapon use scenarios. Press also for multilateral and bilateral nuclear force reduction talks among the five nuclear weapon states in keeping with their existing NPT obligations.

CNANW encourages Canada to embrace these leadership opportunities that will also reflect the wishes of the vast majority of Canadians who support nuclear disarmament.

Steering Committee of the
Canadian Network to Abolish Nuclear Weapons

Excerpt:
We see three near-term steps that Canada could take to demonstrate leadership on this challenging issue.

First, Canada should help heal the rift between TPNW supporters and opponents by attending, as an observer, the first meeting of TPNW states parties (currently 55) slated to be held in Vienna March 22-24, 2022. Such participation would be a welcome sign of engagement with fellow NPT states which have adopted a different route to fulfill the nuclear disarmament obligation.

Second, Canada should advocate for the inclusion in the Stockholm Initiative package, support for a “No First Use” declaration on the part of nuclear weapon states. Such a step would help counter a destabilizing (and proliferation-friendly) expansion of rationales for the use of nuclear weapons on the part of some nuclear states. It would also be timely given the favourable attitude towards such an adjustment of policy expressed earlier by President Joe Biden and the resumption of strategic stability talks between the U.S. and Russia.

Third, Canada should elevate its involvement in the Stockholm Initiative, including participating in the meetings at the ministerial level. Such engagement on the part of Foreign Minister Marc Garneau could be coupled with an invitation by Canada to host a meeting of the group this fall to prepare for the NPT Review Conference.

A recent Nanos poll found 80% across-the-board support for nuclear weapon elimination. A strong 74% majority believe Canada should join the new Treaty on the Prohibition of Nuclear Weapons (“the ban treaty” or TPNW), even if there is pressure from the United States to stay clear. Those results are no surprise. Similar enthusiasm is found in older polls, and in Canadian municipalities where Councils have supported “nuclear-weapons-free zones” for many years

In an International Committee of the Red Cross 2019 global survey, millennials (those born between 1980 and 1994) in the 16 countries polled, overwhelmingly (82%) oppose the use of all weapons of mass destruction – be they nuclear, biological, or chemical – in any circumstance.

And yet, almost half “believe nuclear weapons are an effective instrument of deterrence.”

How can this be?

There lingers a belief that possessing a nuclear arsenal may protect you from enemies. There is also a lack of political leadership countering this dangerous illusion.

For example, just recently the United Kingdom announced they would increase their Trident submarine nuclear warhead limit. There are also plans to “modernize” the arsenals of most nuclear-armed states, including Russia, the USA and China. Some militaries see these weapons as war-fighting options, or as an appropriate response to an overwhelming conventional weapon attack.

And the Canadian government has snubbed the new ban treaty. Rob Oliphant, the Parliamentary Secretary to the Minister of Foreign Affairs, said the ban is “inconsistent with Canada’s collective defence obligations” as a member of NATO. Within the Canadian Network to Abolish Nuclear Weapons, however, we point to NATO’s own policy in support of “eventual” nuclear weapons abolition. And Canada has options: Either sign the treaty while pushing back against alliance nuclear deterrence policy; or work harder for a nuclear weapons convention, as Canada did before. Get back in the game.

Canadian disarmament practice hasn’t always been so hesitant – over decades, leadership was shown on antipersonnel landmines, but also nuclear weapons policy. A resolution was supported by all members of the House of Commons and Senate as recently as 2010. It called on the government to “engage in negotiations for a nuclear weapons convention” and to “deploy a major world-wide Canadian diplomatic initiative” towards that end.  Despite the all-party mandate, the last ten years saw little initiative by Canada.

There is, however, a new effort — that includes Canada — known as the Stockholm Initiative. Sixteen states are engaged, including ban supporters New Zealand, Indonesia and Kazakhstan, but also NATO members Canada, Germany, the Netherlands, Norway, and Spain, as well as two non-NATO nuclear umbrella states (South Korea and Japan). Will this be a fresh start?

“The initiative is positive in principle, but it is too soon to tell whether it will have any meaningful impact,” says Cesar Jaramillo, Executive Director of CNANW member group Project Ploughshares. “Efforts to reframe, rename and relaunch a series of steps or stones or blocks are also not new.” Canada should participate, and at the ministerial level, if this is to be a serious contribution.

Canada can also at minimum sit in as observer to the inaugural meeting of States Parties (likely in January 2022) of the new TPNW to show solidarity with the goals of its 122+ supporting or signatory states. This is also being considered by Germany.

A new global campaign for No First Use (NFU) of nuclear weapons has been established and encouraged the US and Russian leaders Joe Biden and Vladimir Putin at their bilateral meeting in Geneva to engage in talks to reduce nuclear risks. US President Biden is on record as questioning “first use” of nuclear weapons for the US. At the NATO summit of leaders this month, Canada had a chance to promote NFU for the alliance as a game-changing safer policy, but also as an early step towards nuclear weapon elimination.

This opens up the urgently needed discussion of alternatives to nuclear deterrence, a shift to sustainable common security for all peoples, and protection of the global environment. Canada needs to be there.